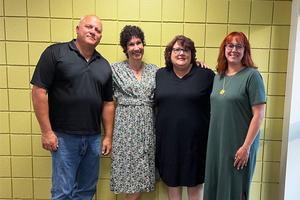 At its June 13, 2022 board meeting, the Penn-Trafford School Board recognized retiring staff.  Each of these staff members had a direct and positive impact on the lives of many students while making a tremendous contribution to the Penn-Trafford community.


Eric Akins spent the first nine years of his teaching career with the Westmoreland Intermediate Unit, and taught in the Penn-Trafford School District since 1996 at both McCullough Elementary and Penn-Trafford High School.  Eric was encouraged by his father, a teacher and school psychologist, to pursue a career in teaching, and he went on to attend St. Vincent College and Indiana University of Pennsylvania where he earned a Masters in Education.  Eric expressed that he is grateful to have been employed in a district with caring colleagues, accommodating administrators, supportive parents, and students who always made him look forward to coming to school.


Tim Buxton joined Penn-Trafford’s maintenance team in 2013 and enjoyed his short commute to the office compared to his prior jobs.  From his perspective, things didn’t change much over his years of service except for the many new faces in the buildings.  His favorite memory was when he was working on the roof of Harrison Park Elementary School and heard voices.  It turned out that a teacher was also up there, reading to the class below.  “I never had so much company on a roof,” he commented.


Mark Crovak joined Penn-Trafford School District in 1987.  He followed in the footsteps of his father, who was also a teacher.  Mark’s career enabled him to teach his favorite subject (social studies) and coach his favorite sport (football).  Mark attended Bethany College and the University of Pittsburgh and taught at both Trafford Middle and Penn-Trafford High Schools.  He claims that his teaching career was a combination of more good days than bad days, and is very thankful for the many good friends he made during his tenure.


Don Cymmerman joined the Penn-Trafford staff as a part-time custodian as a way to keep busy.  He became a full-time employee in 2002, and over his 20-year career has been stationed at Trafford, the high school, and Sunrise buildings.  He is ready to relax and looks forward to his retirement in September.


Shari Elliott joined Penn-Trafford in 1999 as a part-time secretary while her kids were still enrolled with the district.  In 2000 she became the full-time secretary for Trafford Elementary and Middle Schools where she stayed until her retirement.  She notes that technology was the biggest change over her years at PT.  She has enjoyed the staff and working for four different principals and looks forward to spending more time with her grandchildren.


Anna Inglese always knew that she wanted to be a teacher.  She attended Penn State, Cal U, and St. Francis University and holds an undergrad degree in math education, a master's degree in elementary ed, and principal certification.  She spent her first six years teaching in Virginia and then Yough School District, and has been at Penn-Trafford since 1995.  Anna couldn’t pinpoint one favorite moment of her career, saying “It's a million little things... the daily interactions with great students that come from teaching classes.  But there are countless interactions in the less formal settings like cafeteria duty, bus duty, or even in the halls between classes that are just so special.  I cannot imagine another job that could be this rewarding, important, and fun.”


Kathy Kelly-Garris joined Penn-Trafford as a teacher in 1987.  She received her bachelor’s and master’s degrees from Indiana University of Pennsylvania and her principal certification from California University of Pennsylvania.  During her tenure at PT, she taught at Level Green, Harrison Park, Penn Middle, and the high school.  She feels that the biggest changes in education came with the tightening of security because of school shootings, and also the many additional student services that are available today.  Asked about her favorite PT moment, she said “I do not really have an all-time favorite moment, but a really funny one that shows how much PT has changed. In my first year here,  I was teaching senior English. I look up and there is a cow with its face smooshed up against my window. The farmer behind us had a cow escape. Two boys jumped into action. One took off his belt to make a halter. They run outside, halter the cow, and put him back in the fence. They then proceed to fix the fence for the farmer. Life was very simple when this was a farming community.”

Kimberly Lantz joined Penn-Trafford’s staff in 1996 with a teaching degree from Indiana University of Pennsylvania.  She knew from an early age that she wanted to be a teacher; her favorite pastime was playing school with her brother and sisters.  Kimberly spent her entire teaching career at Harrison Park Elementary School.  She cites her favorite memories as those when students had “ah-ha” moments - when things came together and made sense.


Mike Mastalski has retired after 30 years of teaching at Penn Middle School.  He chose a career in teaching because of his love of learning and desire to make a difference in children’s lives.  He attended Indiana University of Pennsylvania where he received his teaching certification.  Over the years, he taught English/Language Arts, American history, world history, science, and mathematics to grades six, seven, and eight.  His favorite memories are of former students who reach out with updates about their lives.  He sees those moments as verification that he made a positive difference in students’ lives.


Terri Mauro became a building nurse in 1996.  During her years of service, she worked at Trafford Middle and Elementary, McCullough, Harrison Park, and Penn-Trafford High schools.  She is proud that she made an impact on the physical and emotional lives of her students, and the emotional well-being of parents, too.  Asked about her favorite PT memory, she cites the 2007 commencement ceremony.  A wheelchair-bound student’s name was announced and every person in the stadium stood to cheer for him, showing incredible unity.  She has never felt prouder of PT than at that moment.


Cheryl McGartland began working at Penn-Trafford in 2002 as a Personal Care Assistant.  During her tenure, she has been stationed at Trafford Middle School, the high school, Sunrise Elementary, and McCullough Elementary.  Asked about her favorite memory, she comments “There were a lot  of special moments for me at PT, but seeing the  special needs students tackle the challenges they faced on a daily basis was my reward.”  Cheryl is looking forward to enjoying as much time as possible with her first grandson.


Janice Skoretz became a teacher after weighing the pros and cons of her other dream job - a commercial artist.  She attended the University of Pittsburgh, Point Park University, and the Art Institute of Pittsburgh and is certified in early childhood and elementary education.   Janice has taught for Penn-Trafford since 1994 and has worked in Trafford, Harrison Park, and McCullough Elementary buildings.  Prior to that, she worked at Saint James School in Wilkinsburg.  She notes two tremendous changes in teaching over her 33 years - technology and COVID.  She couldn’t narrow down one ‘favorite’ memory but did comment, “the greatest impact on my teaching was when my daughter was born. I learned then what it was like to be both a parent and a teacher and I was able to appreciate as well as understand both roles better.”